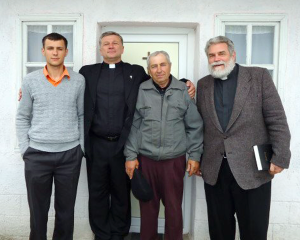 Wednesday’s (May 11) invitation to travel to Kagarlik was a bit out of the ordinary. Usually church is held on Sunday, even in small villages. The added invitation to attend Holy Communion made the trip all the more appealing. Besides, this was an opportunity to visit the home village of one of our seminarians and meet his family. In an effort to become better acquainted with the students, it was an offer I wouldn’t want to decline.

Kagarlik is about 40 kilometres away from the million-plus city of Odessa. Wednesday’s preacher was to be Rev. Sasha Yurchenko, who graduated from the first Ukraine seminary class almost 11 years ago. As we drove toward Kagarlik, one could see endless fields of yellow-flowered canola. No wonder so many people have remarked on the similarity between Ukraine and Saskatchewan. Other fields awaited seeding, but overall the agricultural enterprise seems efficient and up-to-date.

To get to Kagarlik, the car passed through the even smaller village of Kamenka. I remembered that Kamenka was the site of the original seminary LCC helped staff and organize in 1998. I hoped we would pass by that first seminary building, but later was told that the church area in Kamenka is now, unfortunately, in ruins.

As we arrived in Kagarlik, the entire congregation was already seated. I entered along with senior pastor Yurchenko, church elder Misha and seminary student Yuri. After singing a number of beautiful hymns, the normal style in Ukraine of two consecutive sermons followed.

My student, Yuri, preached first on Luke 24. He brought out the important message of Our Lord’s constant caring and companionship along the road of life. Next, Rev. Yurchenko spoke. He impressed me deeply with his God-given ability to zoom in on important Bible themes. His style was intense and full of vigour.

After almost half an hour, the congregation sang a few more hymns before Communion began. The tradition in this congregation, and possibly others in Ukraine, is to allow individual congregants to pray personal prayers aloud, just before consecration of the elements. On this day, some seven people raised their voices to ask for help at the throne of grace. Personal prayers also followed, once the sacrament was finished.

All congregation members in Ukraine receive Holy Communion kneeling—but there are no pads or pillows. This meant everyone knelt and rose on the linoleum, without a mishap. When my turn came, I hoped I would not tip over, and fortunately, there was no problem.

It was my pleasure to bring greetings to this congregation from all the believers in Lutheran Church–Canada. The congregation, in turn, sent back praise and glory to God for the faithful support LCC has given over the years to seminary training and congregational support of the small, confessional Ukraine Lutheran Synod (SELCU).

Following the service I was delighted to meet Yuri’s wife and six-year-old daughter. The elder, Misha, announced that this coming Saturday would be a work day for the congregation–the entire third floor needed painting. Many volunteers offered to help.

Even though the village is one of thousands scattered in southern Ukraine, Kagarlik was very special. Here we see the Lord’s hand steadily at work, bringing Word and Sacrament to all who believe, even on a Wednesday afternoon. I am still trying to determine why Sunday was unavailable and it may have had to do with the church repair and painting set to begin Saturday. But in any event, this was a most memorable village that formed a solid contrast with metropolitan Odessa. Odessa may be “Mama” in the local slang (meaning flamboyant and intrusive) but Kagarlik is faithful, devoted to the Lutheran confessions, and inspiring!

This entry was posted on Saturday, May 14th, 2011 at 12:30 pm and is filed under Ukraine. You can follow any responses to this entry through the RSS 2.0 feed. You can leave a response, or trackback from your own site.