A transition in Costa Rica 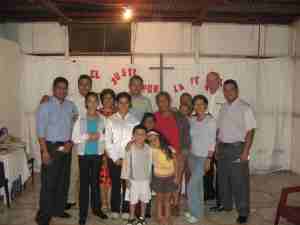 Pastor Edmundo (2nd from left) and Pastor Pedro (1st from right) with a few mission leaders.

This past week I had the opportunity to visit with our two missionaries in Costa Rica and see firsthand the work being done in Casa Cuba, a barrio of San Jose and Cartago, a community about 23 kilometres south east of the capital.

Work began in Cartago about one and half years ago with Missionary Edmundo Retana, our first Costa Rican pastor. His outreach program is a three-pronged approach.
(1) Together with his wife and the assistance of others, they have outreach programs for children and teens in the area. These are held twice a week.
(2) They seek to establish relationships by carrying out special events with invitations being sent to people from the community. These are always well attended especially if they involve their children.
(3) Pastor Retana then carries out what he describes as “scheduled visitations” in the homes of all the people with whom he has comes in contact that week. He describes them as “scheduled” because they are carried out on specific days and he seeks to schedule the visit with the family so that they are prepared for his coming. “I don’t just visit them once, but weekly so that I can get to know them and their needs and they can get to know me and our Saviour.” He says that having made these visits for over a year now, people recognize him on the street and he now has “unscheduled” stops to visit with others. “God is blessing my visits,” he says. He adds, “The people God sends our way are so open to the Gospel.”

On the day of our visit, one of the special events was taking place. Approximately fifty crowded into our rented facility (thanks to Concordia Lutheran Mission Society who provide the financial support for both this facility and the one in Casa Cuba) to hear about an upcoming MOST Ministry Eye-glass clinic in November. After describing what would take place at the eye-glass clinic, he used the opportunity to speak about humanity’s need for spiritual sight and how that comes in the person of Jesus Christ. The teens handed out tickets for the clinic and Pastor Retana then visited with people collecting names and addresses so that he could have the opporutnity to speak with them personally in their homes.

Since his beginning he has confirmed six adults and conducted one baptism. Worship is held on Saturday with an average attendance of 27 people. The time of worship is followed by programs for children and teens.

Pastor Pedro Quintero, our Nicaraguan missionary in the country, has been serving in various barrios of San Jose. During our visit with him, we visited in Casa Cuba where he began work some 8 months ago. This outreach ministry has focused more on the children in the community and with the assistance of a resident from the community, he has been able to develop a children’s program that reaches out to about 30 children. “These are families that I have been able to now contact and share the Gospel with,” Pastor Pedro says.
Pastor Pedro conducts his services on Sunday morning. They have about 20 people who attend regularly, a few coming from other barrios in which he has done work. On Reformation Sunday, Pastor Edmundo will be visiting and together they will celebrate the Reformation with a confirmation service. Pastor Pedro has also been conducting Bible Studies and confirmation on Thursday evenings.

We are thankful to God that through the work of these two missionaries, three women and two men have been identified and now assist in the outreach of the Costa Rican mission. At least three of these people will be attending a future seminary program in Nicaragua.  As a result the church in Nicaragua has requested that Pastor Pedro return to Nicaragua and has now called him to serve as Pastor of Cristo Rey Luterana in El Realejo and to begin an outreach ministry in Corinto. He and his family will return to Nicaragua in November. Missionary Edmundo with the support of these new identified workers will continue to work in Casa Cuba along with Cartago and with God’s blessing expand that ministry into other areas of the city.

We thank God for the work of these two missionaries and pray God’s continued blessing upon the Gospel proclamation in Costa Rica.

This entry was posted on Saturday, October 23rd, 2010 at 1:52 pm and is filed under Central America. You can follow any responses to this entry through the RSS 2.0 feed. You can leave a response, or trackback from your own site.